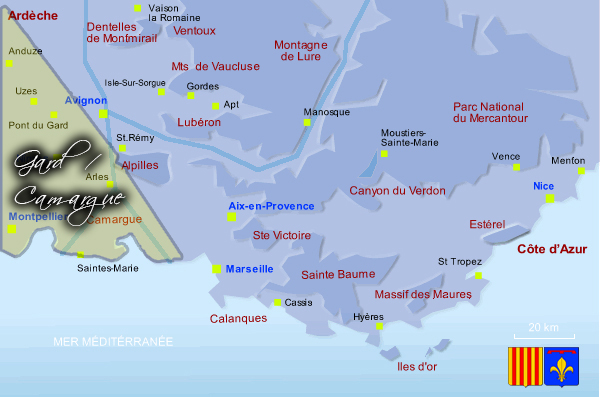 Notable cities include : ARLES, home of Vincent Van Gogh, with its Roman Arena and Amphitheater; AIGUES MORTES (Dead Waters) from the French King Louis IX (Saint Louis) constructed the launching point for his fleet of over 1500 ships to sail for Israel during the crusades; and LES SAINTS MARIES DE LA MER (Saints Mary of the Sea) where, as local legend has it, the Jews of Jerusalem embarked from their boats with neither sail nor oar.

Mary, mother of James and Mary Magdalene remained and were buried on the site where an oratory to the virgin was constructed. Today, a fortress-like church stands in its place, dated between the 11th and 15th centuries.
BACK TO TOP

PONT DU GARD Constructed by the Romans between 40 and 60 A.D., during the reign of the Roman Emperor Claude, the Pont du Gard is one of the greatest engineering feats of all time and is the crowning glory of the thirty-one mile long aqueduct that carried fresh spring water from the Eure river spring in the city of UZÈS to the fountains and fancy thermal baths in the flourishing Roman city of NÎMES, at a rate of 20,000 cubic meters per day. However, whenever the city was besieged, the aqueduct was always cut. Starting from the IV century the aqueduct was no longer maintained and during the IX century, the limestone deposits in the water started to block up the canal and henceforth fell victim to unrestrained pillaging, as it represented an important source of building material. During the XVIII century a road bridge was built to allow the crossing of the river. The Pont du Gard stands 48.77 meters above the GARDON RIVER with a length of 275 meters. It is comprised of 6 arches on its lower tier, 11 arches in the middle tier, and 35 arches at its highest tier.

Beaucaire and Tarascon, today two quiet towns, straddle the RHÔNE RIVER facing each other as do each their castles on each bank of the Rhone. This standoff is a reminder of these towns strategic importance as their location is the narrowest crossing of the Rhone in ages gone by. In Roman times, the location was that where the crossroads of the main Roman roads was located (west to SPAIN, North to LYON, and East to ROME). The site would later become the border of the Kingdom of Provence (on the Tarascon side) and what would become France (where Beaucaire is found). Christianity would take a foothold in France when Clovis, King of France, would be miraculously healed thanks to Saint Martha. Saint Martha, whose relics are found in the Church that bears her name, came up from the LES SAINTES-MARIES-DE-LA-MER to spread the word of Christ, is credited to have tamed a horrific beast “the Tarasque” so that the villagers could kill it.
BACK TO TOP