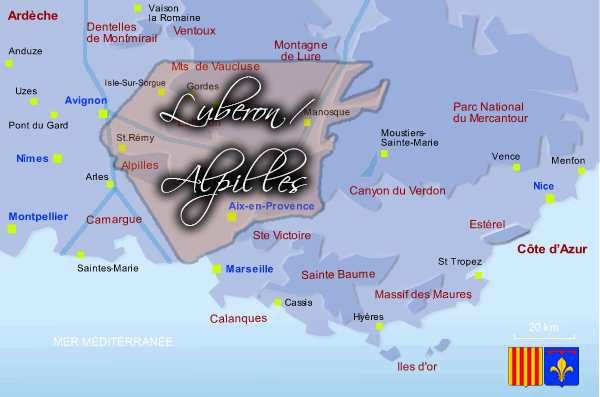 Saint-Rémy-de-Provence is a cute little town which has the privilege of being the birthplace of Michel de Nostredame, a.k.a. Nostradamus, as well as the location of the hospital/church Saint Paul de Mausole, which was home to Vincent van Gogh from May 1889 to May 1890 after he chopped off his ear. Adjacent to the hospital is a nice park where Van Gogh painted some of his works. Walking along the trails of the park one will find various tablets showing copies of his paintings with their histories, and then look up and see the real thing.

Strolling from the park and into the woods you will find the remains of the Roman city of GLANUM in a strikingly attractive landscape surrounded by the ALPILLES Mountains. Just outside the ruins on the road between Saint-Rémy and Les Baux-de-Provence are two roman ruins called “Les Antiques” composed of a Triumphal Arch dated from around 20 A.D. and a magnificent funerary monument called the “Mausolée des Jules” dated between 30-20 B.C. in honor of an important Roman family.
BACK TO TOP

Les Baux-de-Provence sits proudly atop a promontory of rock that measures 900m long by 200m wide. The ruins of its ancient fortress testify to its once glorious past. The lords of Baux once were some of the most powerful in what is today the south of France, ruling over 79 towns and villages. The city even traces its origins to the Magi King Baltazar (hence the star of Bethlehem at the center of its coat of arms).

The city remained powerful until the greed and cruelty of some of its rulers led to its downfall. The city was no stranger to sieges and its fortress was destroyed and then later rebuilt several times before 1632. That same year, Richelieu hammered the final nail into the city’s coffin.

The COLORADO PROVENÇAL, or more like Mars on earth, is a site located just north of the city of APT and outside of the town of Rustrel and is a spectacular natural site where the word “red” assumes all it’s vibrancy and where nature takes on all of its majesty.

In ROUSSILLON, the red rock cliffs and green pine trees create a contrast of color that awakens the imagination. The buildings, new and old are all constructed from the red rock for which this area is abundant. This village, with its small paths, trails, and above all its colors, is a magical place that truly does inspire the artist in all of us.

This charming village, selected as one of the most beautiful in France, sits aloof on a mountain overlooking the fields of the LUBÉRON. It has narrow cobblestone streets which thread their way through tall houses built against the rock, clinging onto its flanks and whispering the tales of a thousand legends. An immense church and fortified castle dominate the town from high above what seems to being a cascade of roofs and stone houses.

In the Roman times, Gordes was an oppidum (Latin for the main settlement in any administrative area of the Roman Empire); the tribe that lived there was that of the Vulgientes or Vordenses which gave its name to the original village; the "V" usually became a "G" (Vordenses - Gordenses) in the Gallo-Roman days.
BACK TO TOP